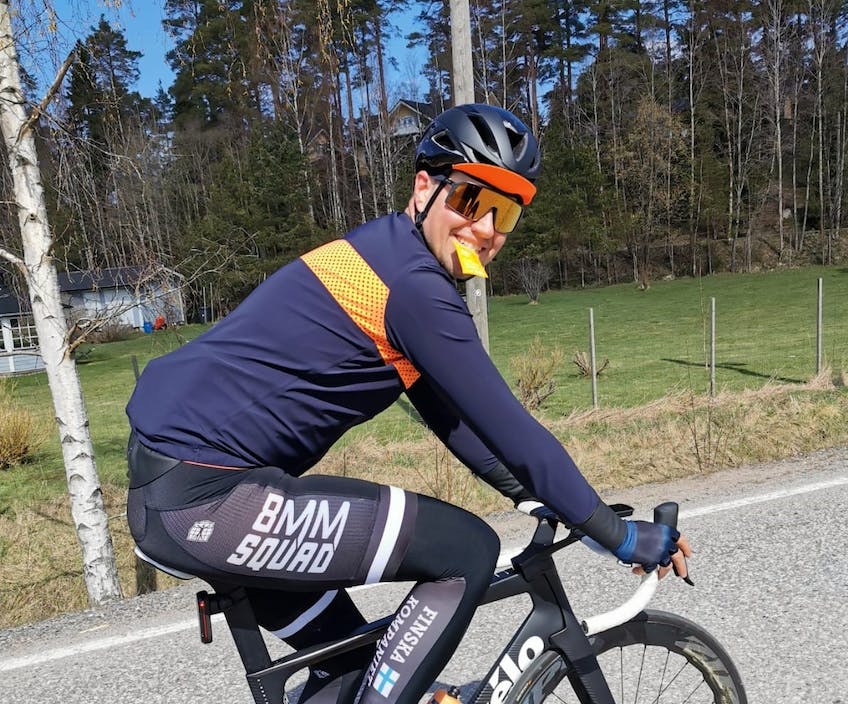 Many people take the power of the brain for granted. We live our daily lives on autopilot without realising the importance of brain function for the smallest things, like talking or drawing. However, there comes a time when some people, like Triathlete Robson Lindberg, are faced with a major life changing accident, after which their everyday life takes a 360 degree turn.

Robson Lindberg, IRONMAN presenter, triathlete (an IRONMAN himself) and inspirational speaker shares his incredible story about defying the odds after a brain injury, with Susie Perry, Dip ION Food Scientist and Nutritional Therapist as part of the Vitamin C Convention 2022 series.

Robson says that sports have been his lifelong passion- starting his first when he was one and a half years old. Unfortunately, back in 2015 he had a brain injury while playing ice hockey. From that point on, he had to relearn everything, from crawling to walking, to writing- the list goes on.

The brain damage had some important impact on his personality as well. Before the accident, he described himself as being very extrovert, but he came to realise, during some family holidays following the incident, that he had gone to the opposite side of the spectrum, being extremely introverted. Such changes are not uncommon: a study that investigated personality traits after brain injury found that 59.1% of people experienced changes in their personality following acquired severe brain injury.[1]

“20 neurologists sat in their chairs with their white coats on, and told me I'm never doing any sports and I'm never going to work again.”

After Robson´s amazing recovery, he reflected on the response of medical personnel, which made him realise: "...there is a stigma around western medicine because it is deeply rooted in science and knowledge… if I was treated not as a statistical outlier but as a valid data point we wouldn't be having this discussion, unfortunately, recovery is mostly ascribed to personality traits or resilience.”

Robson was afraid of all the changes going on, but there was one thing that did not change throughout this traumatic experience: his passion for sports, which motivated him to get better: “ …It was the scariest thing I've done in my life, I admitted to myself that I got brain damaged and I need a goal, and that goal was the first thing I thought of: I want to win the first championship of IRONMAN cup in Hawaii”.

What is an Ironman?

An Ironman Triathlon is considered one of the hardest sport competitions in the world. It is a long distance triathlon consisting of 3 different sports:

Training for the IRONMAN consists on five pillars: Balance of your own strengths and weaknesses at all three sports; Consistency of training while juggling daily life and busy schedules; Endurance because sustaining is necessary for succeeding; Adaptability for adjusting goals to your own body and needs and lastly Recovery, which plays an essential role in the training spectrum. Find your next IRONMAN race here!

Everesting: all you should know

Robson is an excellent athlete and enjoys quite an interesting sport called: Everesting. It consists of either running, cycling or ski touring up and down the same hill until you have reached 8,849 metres - the same height as the summit of Mount Everest.

His training usually involves both low intensity and high intensity periods just around the aerobic threshold, building up endurance. He started with one long 3 hours ride a week, and now he endures a 7 hours a week ride, on average.

This is a map of a tour he did in less than 24 hours in Finland: 628km around Helsinki, Turku, Tampere and then Helsinki again.

Tweaks for the marathon

Robson shares with us his daily life tweaks for a maximised sports performance. He mentions that small changes turn out as big results, for example, changing his waking time, sleeping time, eating habits and drinking green tea. From time to time he follows a low carb, high fat diet and feels his energy levels rising rapidly. He has also used a keto diet to lose over 10 kilos in 2 months. But the most important tweak for him would be including Liposomal Vitamin C everyday in the morning or evening. Also, if he feels a flu coming up, he takes up to 3 sachets of Altrient C in the morning to help prevent it.

Vitamin C has lots of benefits that have been linked to a better performance:

It's no wonder vitamin C is a favourite amongst athletes, including triathletes and olympians such as Jessica Ennis Hill. Altrient C has also passed Informed Sports doping tests so it can be taken by professionals with confidence. More info here.

What happens to our body when we exercise?

“What high intensity training does is that it exposes you and lowers your immune system, making you more susceptible to colds, etc..”

Even if high intensity exercise is great for our health, as we are stepping up and using our muscles and lungs, the antioxidants quickly try to protect the body and take care of all those free radicals that are released at this time. However, mopping free radicals can often leave other areas of the body, like the immune system, less assisted and with a decreased number of nutrients to support it. Intense exercising is a stressful activity for the body. This is why it is common for endurance athletes to have a tendency for upper respiratory tract infections.

Turns out Liposomal vitamin C also plays a big role in athletes´s lives by having an impact on their minds. As Robson describes it, sportspeople like to optimise and calculate, and also set clear goals to accomplish while training. Therefore, the more mental acuity you have, the better for accomplishing goals, optimising and accomplishing calculations and “vitamin C is definitely a part of that” according to Robson.

Vitamin C is way more than just about immune support and muscle recovery, what it can do for the mind is amazing: “I soon noticed after taking it, 20 minutes later, a bit of an uplift and a bit more mental clarity...” -Susie.

Robson Lindberg continues showing his passion for sports, is now a dad, an inspirational speaker and keeps on being the best TBI patient. Follow Robson on: @stupid7cycling and @robson.lindberg.

Watch the whole video and more from the series here!

To make practitioner strength products accessible to everyone.

Our formulations provide high strength nutrients in advanced bioactive forms combined with synergistic patented botanical extracts to deliver absorption levels and efficacy that is a cut above the norm.

Inspired by the science of nature

To be responsible in the choices we make when sourcing ingredients and creating effective packaging in terms of building sustainability and preserving biodiversity.